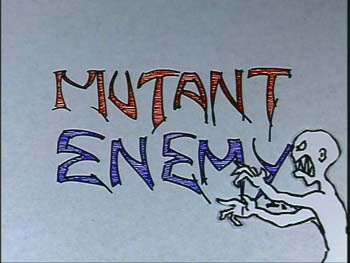 Origin: "Mutant Enemy" was the nickname Joss Whedon gave to the typewriter upon which he started his writing career, and came from the Yes song "And You And I" (specifically, the third section of the song entitled "The Teacher and the Preacher"), a band Whedon is a big fan of. This song was inspired by Isaac Asimov's "Foundation" series of books, and the "mutant enemy" of that series was a character called the Mule.

The famous 'Mutant Enemy' production screen (with its associated zombie) was, according to Whedon, the product of desperation: Whedon was told that he needed one, and the Big Meeting started in twenty minutes!

The term Lampshade Hanging was the one most used in the Mutant Enemy bullpen and it was for this reason that the trope was given the name here.

Writers from Mutant Enemy include:
Advertisement: