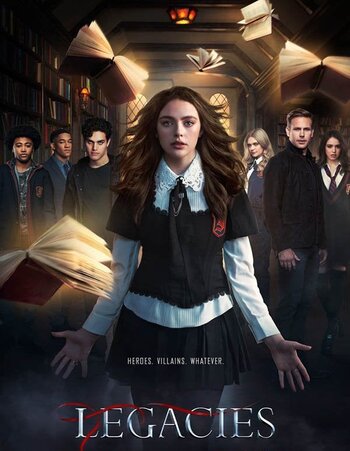 Heroes. Villains. Whatever.
Legacies is a 2018 supernatural horror series on The CW, as well as a spinoff of both The Vampire Diaries and The Originals. It is the third entry to The Vampire Diaries Universe. It was ordered to a series without a pilot in May 2018, and premiered on October 25.
Advertisement:

Set two years after The Originals, Legacies follows Hope Mikaelson (Danielle Rose Russell), the tribrid (vampire, werewolf, and witch) daughter of Klaus Mikaelson —one of the original vampires— at the Salvatore School for the Young and Gifted, located in Mystic Falls.

The series was cancelled in May 2022 after four seasons, bringing The Vampire Diaries Universe to a close after 13 years of being on The CW.