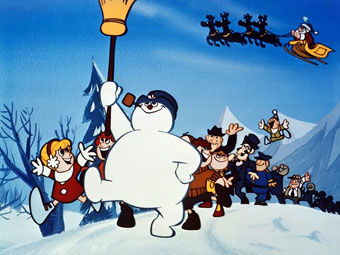 Frosty the Snowman is a Christmas Special, produced by Rankin/Bass and first aired on CBS in 1969, telling the story of how a snowman was brought to life by a magic top hat. Frosty the Snowman is unusual among the Rankin/Bass œuvre in that it features hand-drawn animation (Courtesy of Mushi Productions, under the uncredited direction of Osamu Dezaki) and designed by Paul Coker Jr. who is also well-known for his artwork in MAD Magazine, instead of Rankin/Bass's usual "Animagic" Stop Motion puppet process.

The script is by Rankin/Bass' favorite writer, Romeo Muller, and as usual, is built around a classic holiday tune (although technically, the original song doesn't actually mention Christmas at all), though the usual additional original songs by Maury Laws and Jules Bass are conspicuously missing. Jimmy Durante voices the special's narrator.

It is notable that in the audio album version of this special, June Foray voices Karen, and indeed all the children's parts, whereas the televised version uses the voices of actual (uncredited) children.

A sequel, Frosty's Winter Wonderland featuring Andy Griffith as the narrator, was produced in 1976 and the feature-length Crossover Rudolph and Frosty's Christmas in July (which, unlike the previous installments, utilized R/B's "Animagic" process) followed in 1979; Jackie Vernon reprised the part of Frosty in both, and over the course of them our hero acquires a snow-wife (Crystal, voiced by Shelley Winters) and even snow-kids (for everyone's sanity, don't ask how that works). A non-Rankin/Bass sequel, Frosty Returns, with John Goodman as the title character, Jonathan Winters as the narrator, and the animation made by Bill Meléndez of the Peanuts animated specials fame, was made in 1992; it was not generally well-received. In this one, the plot focuses around a secular "Winter Carnival" holiday and features an evil businessman named Mr. Twitchell that goes around spraying "Summer Wheeze", an aerosol that gets rid of snow. Apparently, the entire town hates snow. The entire film is about Frosty and a new girl named Holly singing about how good snow is. If you haven't guessed, it's a somewhat environmentally-themed short, one that would make the Planeteers cringe at how unsubtle it is with its message if it could decide whether snow is environmentally necessary or just something pretty and fun to play in. Then in 2005, another special, The Legend of Frosty the Snowman, was released on video, with Bill Fagerbakke as the voice of Frosty.

Not to be confused with the somewhat similarly-themed British Christmas Special, The Snowman.

This is also not the first time the song was adapted into animation. There had previously been a theatrical short created in 1954 by UPA (of Mr. Magoo fame).