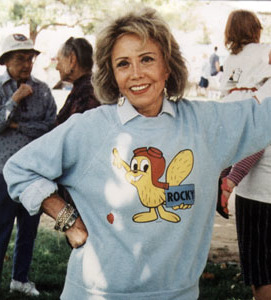 "Did you grow up with me, too?"
"June Foray is not the female Mel Blanc. Mel Blanc was the male June Foray."
— Chuck Jones
Advertisement:

June Lucille Forer (September 18, 1917 – July 26, 2017), better known by her stage name June Foray, was an iconic American voice and film actress, best known as the voice of many popular animated characters (particularly Rocky the Flying Squirrel and Granny). Her long and prolific career encompassed radio, theatrical shorts, feature films, television, record albums (particularly with Stan Freberg), video games, talking toys, and other media. In addition to being the last of the Looney Tunes voice actors from its golden era, Foray was also one of the founding members of ASIFA-Hollywood, the society devoted to promoting and encouraging animation.

Foray was born in Springfield, Massachusetts, where her voice was first broadcast in a local radio drama when she was 12 years of age; by age 15, she was doing regular radio voice work. Two years later, she moved to Los Angeles, California, and soon became a popular voice actress on radio there, including on the national programs of Jimmy Durante and Danny Thomas.

In the 1940s, she began film work as well, including a few appearances acting in live-action movies, but mostly doing voiceovers for animated cartoons. At 4'11", Foray's diminutive stature somewhat limited her stage and on-camera acting career.

For Walt Disney, she played Lucifer the Cat in the feature film Cinderella and his Witch Hazel character; she also did a variety of voices in Walter Lantz' Woody Woodpecker cartoons. For Warner Brothers Cartoons, she was Granny (whom she played, on and off, since 1943), owner of Tweety and Sylvester, and, memorably, a series of witches, including Witch Hazel, for Chuck Jones; plus, she served as the narrator of Really Scent. She was also the voice of Granny on Baby Looney Tunes.

She voice acted on The Smurfs as Jokey Smurf and Mother Nature, Ursula in George of the Jungle, and on How the Grinch Stole Christmas! as Cindy Lou Who, asking "Santa" why he's taking their tree. She was the voice of the original "Chatty Cathy" doll as well as the voice of the evil "Talky Tina" doll in The Twilight Zone (1959) episode, "Living Doll". She voiced the wife of the man getting dunked ("Don't tell him, Carlos!") in the Pirates of the Caribbean theme park ride. She also lent her talents to a couple of characters featured in the 1988 film, Who Framed Roger Rabbit.

Foray worked for Walter Lantz on some of the later Woody Woodpecker cartoons, the Hanna-Barbera studio, including The Flintstones, Tom and Jerry, Scooby-Doo, Where Are You!!, The Jetsons, and many others. She did extensive voice acting for Stan Freberg's commercials, albums, and 1957 radio series, memorably as secretary to the werewolf advertising executive. Foray also appeared in several Rankin/Bass TV specials in the 1960s and 1970s.

Most recognizable, though, is her work for Jay Ward: she played nearly every female on The Rocky And Bullwinkle Show, including Natasha Fatale and Nell Fenwick, as well as Rocket J. Squirrel, who was a boy (a.k.a. Rocky Squirrel). Foray also voiced Magica De Spell and Ma Beagle in the televised cartoon DuckTales (1987) (She would later reprise the role of Magica in the 2013 remake of the Capcom videogame). Most significantly in the later part of her career, she had a leading role voicing Grammi Gummi on the landmark television series that helped usher in The Renaissance Age of Animation, Disney's Adventures of the Gummi Bears, where she worked with her Rocky & Bullwinkle co-star Bill Scott for the final time before his death in 1985.

For the longest time, Foray was among the few surviving voice artists from the Golden Age of theatrical cartoons. She remained active right up until her passing, with roles in animated films, such as Mulan and Looney Tunes: Back in Action. Around 2003, she was a special guest star in an episode of The Powerpuff Girls. In October 2006, she portrayed Susan B. Anthony on three episodes of the podcast The Radio Adventures of Dr. Floyd.

In 1995, ASIFA-Hollywood, a chapter of the Association Internationale du Film d'Animation (the International Animated Film Association), established the June Foray Award, which is awarded to "individuals who have made a significant and benevolent or charitable impact on the art and industry of animation." June Foray was the first recipient of the award. At age 90, Foray became a contributor to ASIFA-Hollywood's Animation Archive Project.

In 2007, Canadian voice actress Britt Irvin became the first person ever to voice a character in a cartoon remake that had been previously voiced by Foray in the original series, when she started voicing the character Ursula (Foray's former character) in the new George of the Jungle cartoon series on the Cartoon Network.

In 2012, Foray was nominated for—and won!—her first Emmy Awardnote The Emmy categories for cartoon voices are relatively recent additions, so it isn't quite as big an Award Snub as it may seem. for her role as "Mrs. Cauldron" on The Garfield Show. That may well make her the record-holder

for the oldest Emmy nominee in any category. This caused series producer Mark Evanier to remark: "In case anyone's wondering what you have to do to get nominated for an Emmy, it's simple: Just be the absolute best at what you do for around seventy years."

Foray passed away on July 26th, 2017, just a couple months shy of her 100th birthday, leaving behind an incomprehensibly vast body of work that made her an indelible part of the childhood of numerous generations.