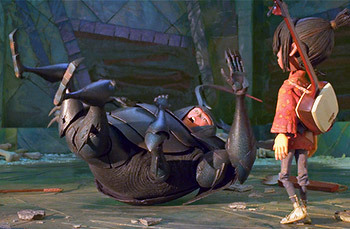 A common Weaksauce Weakness is flipping something or someone on their back. While it is possible to reorient, it usually takes a significant amount of wobbling to do so, leaving one vulnerable.

In video games, this is very effective against Stone Wall enemies, especially shelled ones.

A problem that tends to happens to turtles and tortoises (and Bender) from time to time.