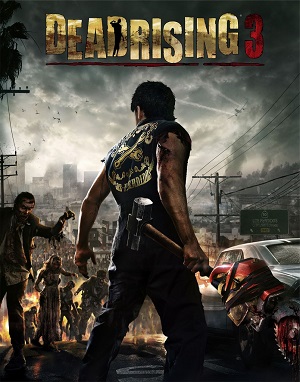 When all you have is a sledgehammer, a cement saw and tons of duct tape...
Welcome to the After Party.
Advertisement:

Dead Rising 3 is the third game (not counting spinoffs like Case Zero or Off The Record) in Capcom's Dead Rising series, released on November 22nd, 2013.

Ten years have passed since the Fortune City outbreak. The US government and Phenotrans are slowly but surely making progress towards containing the zombie virus, mainly by beginning to implant biochips into all infected citizens. These biochips supply infectees with daily doses of Zombrex to prevent them from turning, and track them through GPS systems in the event they do turn. While this move has proven controversial, with a band of so-called "Illegals" refusing to get Zombrex chips citing that they're turning the US into a surveillance state, it has been able to contain the infection well enough.

Unfortunately, due to mysterious circumstances, a zombie outbreak has occurred in Los Perdidos, California, turning the city into a disaster zone within days. This leave our protagonist, a young mechanic named Nick Ramos, with one chance at survival - work with his friends Dick Baker, Rhonda Kreske, and any other survivors he comes across along the way, to fix a small plane he's been working on and use it to escape Los Perdidos before it gets firebombed by the US military in six days' time.

Initially announced in 2010 following the sales success of Dead Rising 2, Dead Rising 3 made its debut at E3 2013, where it was announced as an exclusive launch title for the Xbox One. It was later ported to the PC via Steam in September of 2014.

open/close all folders
A-G
H-Z
Advertisement:
And the Devil did grin, for his darling sin is pride that apes humility.
— Samuel Taylor Coleridge
Feedback

Flips her scooter on the pools of vomit, pinning herself under its weight. Unable to shift her own immense girth, Darlene can only lie there as her belly starts to quake from her upset stomach, and... that's all she wrote.

Example of:
Death by Gluttony

Flips her scooter on the pools of vomit, pinning herself under its weight. Unable to shift her own immense girth, Darlene can only lie there as her belly starts to quake from her upset stomach, and... that's all she wrote.