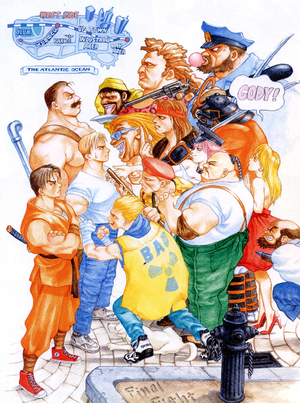 The original game in a nutshell.
"Mayor Mike Haggar vowed to snatch the streets of Metro City back from the crooks with his bare knuckles! But the Mad Gear Gang snatched his daughter Jessica. Now there's gonna be some bone-crushing dues to pay! Jessica's boyfriend Cody and his friend Guy hit the streets hard with Haggar, denting heads downtown and slugging it out in the slums. Now you're Haggar, Cody or Guy, each with his own fighting style. Demolish gangland henchmen, samurai swordsmen and musclebound crime bosses in a fist-to-nose frenzy!"
Advertisement:

Final Fight is a belt-scrolling Beat 'em Up by Capcom, originally released for the arcades during the very end of 1989. As one of the earliest games for Capcom's CPS hardware, Final Fight helped popularize the beat 'em up genre during the early-to-mid 1990s that was previously established with the likes of Irem's Kung Fu Master and Technos Japan's Renegade and Double Dragon. It was ported to a variety of gaming platforms such as the SNES (in two different versions), the Sega CD, and the Game Boy Advance, among others.

In the original game, the Mad Gear gang kidnaps Jessica, the daughter of Mike Haggar, former pro wrestler and current mayor of Metro City, because Haggar would not turn a blind eye to their dominance of the city's underworld as the previous mayor had. Haggar teams up with Jessica's martial artist boyfriend Cody and his sparring partner Guy, a ninjutsu master seeking to test his skills and also himself a friend of Jessica, so that they can save the city and Jessica. The game has life meters not only for the heroes, but also for the villains.

The game's development contains some interesting tidbits: The people in charge of Capcom at the time requested a sequel to Street Fighter.note This was more than a year before Street Fighter II. As such, the game was originally known as Street Fighter '89, but had its title changed before release when the game ended up becoming a side-scrolling beat 'em up and not a competitive Fighting Game. The Final Fight universe was later folded over into the Street Fighter canon when characters from Final Fight started to appear in the Street Fighter series.note Up to 2019, the list is as follows: Guy (SFA1, SFA2, SFA3, SSF4, SSF4AE, USF4 and SFXT plus Capcom Fighting Evolution), Sodom (Alpha series only), Rolento (SFA2, SFA3, CvS2, USF4 and SFXT), Cody (SFA3, USF4, SFXT and SFV), Hugo Andore (SF3:2I, SF3:3S, SVC Chaos, USF4 and SFXT), Maki (CvS2 and the Upper and Max versions of SFA3), Poison (cameo in SF3:2I, SF3:3S and SVC Chaos, and playable in USF4, SFXT, and SFV:AE), Haggar (MVC3, UMVC3 and MVCI), Abigail (SFV), and Lucia (SFV:AE) It has culimated with Metro City, the setting of Final Fight, becoming the central story location of Street Fighter 6.

While Capcom produced several beat 'em ups for the arcade after Final Fight, the game itself was only followed by two straight-to-home console sequels for the SNES before fading out completely. Two attempts to revive the series in 3D were made by Capcom USA: Final Fight Revenge, a 3D fighting game featuring characters from the original game, including a zombie version of Belger, for the Sega Titan hardware (which saw a Japan-only home port for the Sega Saturn as Capcom's final game for the system); and Final Fight: Streetwise, an Open World game and a Darker and Edgier attempt to cater to the Grand Theft Auto crowd.

In April 2010, an Updated Re-release of the first game was brought to Xbox Live Arcade and the PlayStation Network featuring remixed music from the staff behind Bionic Commando: Re-Armed, and new HD filters. It also comes with the Capcom's 1991 hack'n slash side-scroller Magic Sword: Heroic Fantasy.

It's also one of seven games included in Capcom Beat 'Em Up Bundle, a collection released in 2018 on PlayStation 4, Xbox One, Nintendo Switch and Steam.