Episode of the Dead 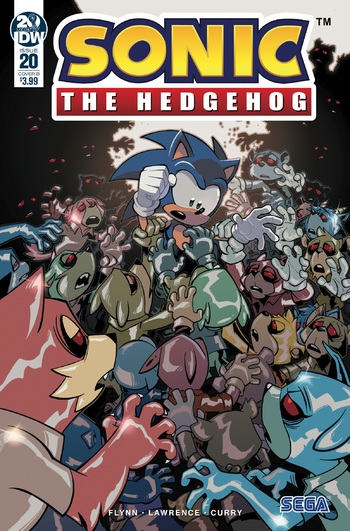 They're not just robots. They're zombots.
The Zombie Apocalypse is a scenario no one wants to be in. Zombie Stories are an entire genre completely dedicated to such an event. But in some works, zombies are focused on for a brief period — a special episode, chapter, stage or level (depending on the media). It may be named Title of the Dead or other similar titles that evoke zombies.
Advertisement:

There are many ways this can come about. Perhaps the Villain of the Week or the Monster of the Week have powers related to zombies. Maybe the protagonists or a One-Shot Character accidentally release The Plague or The Virus. Or maybe they just stumble upon a post-zombie apocalypse location.

In more comedic works, the zombies can be played more lightheartedly and there will more likely than not be a Reset Button Ending for the next episode, or else the episode is effectively non-canonical. In more serious works, the protagonists will finally find a cure for The Virus and all returns to normal at the end of the episode... or they just left the haunted/infected place without coming back.

A sub-trope of Tropes of the Living Dead, Everything's Deader with Zombies and Episodes. May overlap with a Halloween Episode and/or Bizarro Episode. Not to Be Confused with Zombie Stories, stories entirely about zombies — this trope is about zombies temporarily being the focus of a work.