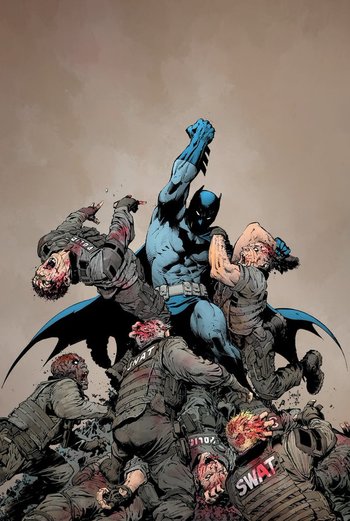 "What happens to the world's greatest super heroes when the world ends?"
Advertisement:

DCeased began as a miniseries by Tom Taylor depicting a dark Elseworld version of the DC Universe, which soon spawned many spinoffs and two sequels.

The story takes many cues from the Zombie Apocalypse genre, focusing on a corrupted, technological version of the Anti-Life Equation that, instead of brainwashing the masses, turns them into ravenous, rage-filled undead that will stop at nothing to destroy any living persons, including superhumans. Now the heroes of the DC Universe must stop the threat before all is lost, but when superheroes are among the infected, can anything stop them?