"Everyone Is Gone" Episode 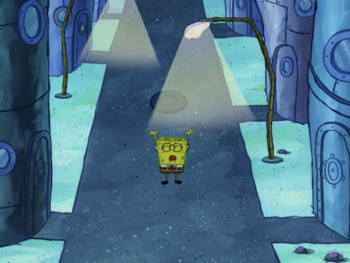 "Where did everybody go?!" note It was National No SpongeBob Day.
An episode of a show where a main character wakes in the morning to find everyone but themselves has vanished. Sometimes the episode revolves around the character trying to find everyone, other times it may be them just enjoying the benefits of having a world to themselves, or alternatively it will have the character suffer varying levels of psychological trauma from their isolation, up to and including slowly going insane due to their solitude.
Advertisement:

Typically something will happen at the end to make everyone reappear, whether it be the remaining character rescues them from a kidnapper, it turns out to be All Just a Dream, or that everyone just comes back from a bus. Almost always has the remaining character not aware of where anyone went or what happened to them. If it turns out everyone is fully dead and won't come back fine at the end, then it would cross with Sole Survivor.

In extreme cases where the entire species or planet is gone, it would also mesh with Last of His Kind. The remaining character would also be a Genocide Survivor if the reason everyone is gone is because they were murdered, and in those cases it could mesh with Everybody's Dead, Dave. By the nature of this trope, it always exists alongside either Ghost Town or Ghost City, and possibly even Ghost Planet in extreme examples. It also goes without saying that the main character is then the Mayor of a Ghost Town. Will sometimes have the remaining character drop an It's Quiet… Too Quiet. Usually an episode of a cartoon or show or issue of a comic, but does not always need to be.

Bloo drops a chip on the floor, so he tries to look for Frankie and later everyone else in the house to clean up his mess, but everyone is gone.

Bloo drops a chip on the floor, so he tries to look for Frankie and later everyone else in the house to clean up his mess, but everyone is gone.