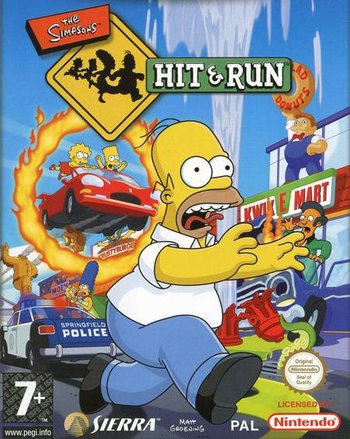 Save Springfield! By car. By foot. By the seat of your pants.
Bart Simpson: Quick! To the Fatmobile! Muh heh heh ha ha!
Comic Book Guy: Yes I suppose, but must we call it that?

The Simpsons: Hit & Run is a 2003 Wide Open Sandbox game by Radical Entertainment in the vein of the Grand Theft Auto series, but with less firepower and more kicking. Five characters from the series are played in the seven-level long story mode (In order: Homer, Bart, Lisa, Marge, Apu, Bart again and then Homer again), which initially starts off mundane with Homer's antics on his way to work, but shifts into a conspiracy involving the kidnapping of Bart, strange floating wasp cameras, and a strange new brand of cola. And it gets even stranger from there...

Hit & Run is commonly regarded as one of the best Simpsons tie-in games, and it's still enjoyed by the fandom to this day, making it a licensed game that does not suck! The PC version also has an active modding scene

, with numerous game mods adding in content like online multiplayer, more cars, the maps from The Simpsons: Road Rage, and more.

"I wish I had a trope list with a saddle."