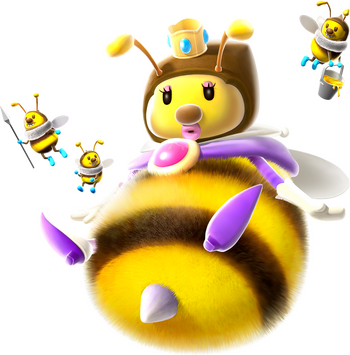 "Bees got no business getting that big."
— Woodie, Don't Starve
Advertisement:

Many insect species in the orders Hymenoptera (ants, bees, wasps) and Isoptera (termites) exhibit a behavior known as Eusociality

, a behavioral structure which involves a singular "queen" whose only or primary purpose is to lay eggs. The other members of the queen's colony have the purpose of mating with her, tending to her, or protecting her. (Think of the colony as one big "superorganism," rather than a group of individual ants/bees/etc. The queen and the males that mate with her are the "genitals" of that "superorganism.")

In fiction, however, such individuals tend to be depicted as not only being baby factories responsible for birthing the entire colony, but also as matriarchs who rule over it to varying degrees. The "queen" in question may be bigger and much stronger or dangerous than the rest of her kin, and tends to be portrayed as being capable of commanding swarms of drones as her own personal minions and/or bodyguards in a similar manner to Hive Queens. This is Truth in Television to some extent (queens are bigger and can and do fight in at least some species, and also communicate with and "command" their children through pheromonal influences), but fiction tends to exaggerate it considerably.

In works that feature a Hive Caste System or cartoonish depictions of eusocial insects, writers like to portray the queens (and occassionally king insects) as literal monarchs, complete with crown, royal attire, and a court of loyal subjects. Even if the colony is less like a human-like monarchy and more of a Horde of Alien Locusts, expect the queen to at least possess traits resembling regalia that indicate their authority, such as a biological "crown". If evil, expect the queen to act akin to an Evil Matriarch, with no qualms about siccing her Weaponized Offspring on her enemies since she can always make more.

A common fixture of the Hive Caste System. Subtrope of Monster Lord. Frequently overlaps, but is not to be confused, with Hive Queen (which is the controlling core in a unified network mind).