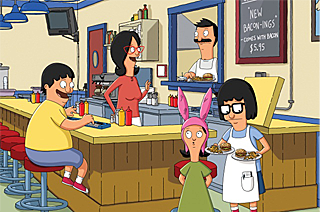 "Come meet our family, and let us meat you!"Note Clockwise from top to bottom: Gene, Linda, Bob, Louise, and Tina.

Bob's Burgers is an American animated sitcom created by Loren Bouchard for the Fox Broadcasting Company, starring H. Jon Benjamin. The show is about a man, his family and their floundering burger joint. Despite the greasy counters, lousy location and occasionally spotty service, Bob and his lovable and quirky family are convinced their burgers are their ticket to success.

Loren Bouchard stated that Bob's Burgers came out of the fact that Fox's animation brand centers mostly on family, but that he also wanted to dabble in workplace comedy.

Bob's Burgers gains most of its humor through quirky, yet realistic characters and situations, unlike most of Fox’s current animated line-up, which revels in pop culture references, exaggerated characterizations, and vulgar humor (with the current episodes of The Simpsons and Family Guy guilty of this). Some examples include: the kids exploring an abandoned taffy factory, the restaurant nearly getting shut down over accusations that the burgers are made of human flesh, Bob dueling with a capoeira fighter for his daughter's attention, Bob and the kids "rescuing" a crazy man's mannequin wife from a sex toy store, and Bob going undercover at a convention for men who like a pony cartoon that's marketed to girls to get Tina's doll back.

For these reasons, it falls very close to King of the Hill on the adult animation spectrum. Indeed, some have considered it a worthy (if crazier) successor.

from Dynamite Comics. A feature film is currently slated for July 17th, 2020.

Vote for the best episode here!

In Season 5 "Dawn of the Peck", with Bob not cooking Thanksgiving dinner, he spends time with potato chips, daytime whiskey, and the turkey baser.

In Season 5 "Dawn of the Peck", with Bob not cooking Thanksgiving dinner, he spends time with potato chips, daytime whiskey, and the turkey baser.