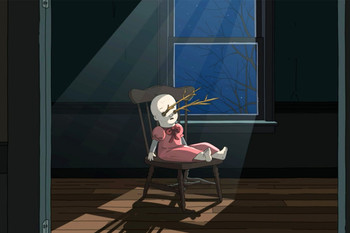 "That isn't a good use of that room."
Advertisement:

Bob's Burgers makes its name in crowning moments of awesome, rockin music, well-done jokes and humor, things that warm our heart, references to movies, TV shows, and more, and even its emotional scenes. But to say that the Spiritual Successor to King of the Hill (as some fans call it) is capable of scaring people is an Understatement, because the show, more often than not, can serve up loads of scares in the kitchen. And really, what else do you expect from the guy who created Home Movies and was one of the main producers of Dr. Katz, Professional Therapist?