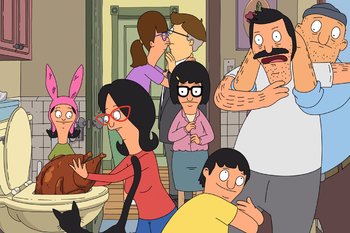 Mutiny on the Windbreaker

The Unbearable Like-Likeness Of Gene

O.T.: The Outside Toilet

It Snakes a Village

The Kids Run the Restaurant

Turkey in a Can

Christmas in the Car

The Kids Rob A Train

I Get Psychic Out Of You

The Kids Run Away

Tina and the Real Ghost

Dawn of the Peck

Father Of the Bob

Late Afternoon In the Garden of Bob and Louise

The Cook, the Steve, the Gayle and Her Lover

The Gene and Courtney Show

They Serve Horses, Don't They?

Large Brother, Where Fart Thou

The Last Gingerbreadhouse On the Left

Thelma & Louise Except Thelma Is Linda

Paraders of the Lost Float

The Silence of the Louise

The Wolf of Wharf Street

Sit Me Baby One More Time

The Secret Ceramics Room of Secrets

Sleeping With the Frenemy

The Trouble With Doubles

Go Tina on the Mountain

Are You There Bob? It's Me, Birthday

As I Walk Through the Alley of the Shadow of Ramps

Just One of the Boyz 4 Now

The Taking of Funtime 123

I Bob Your Pardon

Roller? I Hardly Know Her!

Louise: Circles and math. It's the perfect game.

UFO No You Didn't

Every Which Way But Goose

If You Love It So Much, Why Don't You Marionette?

PTA It Ain't So

Yes Without My Zeke

Season Ten
The Ring (But Not Scary)

Legends of the Mall

The Hawkening: Look Who's Hawking Now

Land of the Loft

Now We're Not Cooking With Gas

Have Yourself a Maily Linda Christmas

Three Girls and a Little Wharfy

Flat Top O' The Morning to Ya

Prank You For Being a Friend

Diarrhea of a Poopy Kid

The Terminalator II: Terminals of Endearment

Stuck in the Kitchen with You