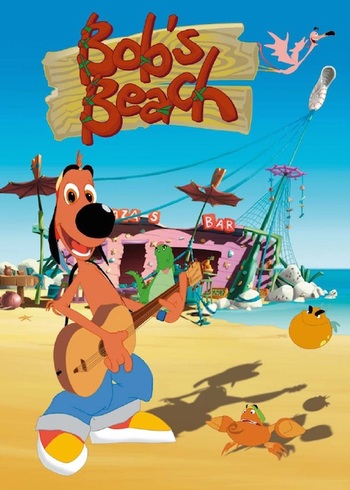 Bob, a city dog from Downtown New Yorknote At least, he says that in one episode, though one line in the theme song states he comes from "Brooklyn town", accidently gets shipwrecked on a deserted island. In his attempt to go back, he realizes the island isn't exactly as deserted as he thought. Along with his new island friends; Nel, Montego, Zaza, Magada and Loubabi, Bob courageously digs into the marvels of this new tropical world, and learns to love it.

Bob's Beach is a German/Luxembourgish animated children's TV series created and produced by Sophia Kolokouri. The series was originally produced in 2005, but here's the catch; it was never officially released anywhere until Oznoz hosted the series in 2012. Seriously. The series also finally premiered in Germany on Fix und Foxi on June 21, 2014 (see the trailer here

The series was then made available on Amazon Prime in 2019, and is also available for free on Tubi.

The opening theme to Bob's Beach.

The opening theme to Bob's Beach.