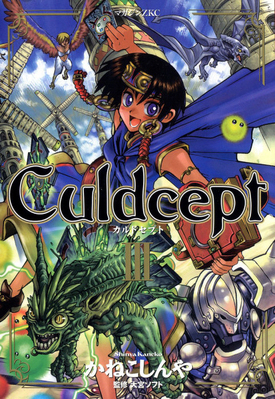 The manga series based on Culdcept, a card-based videogame. The manga was drawn by Shinya Kaneko and serialized in Japan by Kodansha in Magazine Z, and collected in six bound volumes. It is licensed in English by Tokyopop, and in Indonesia by Elex Media Komputindo.

The manga revolves around the adventures of Najaran, a Cepter (card-user) under the tutelage of master Cepter Horrowitz. With her worrywart companion, the sentient staff Goligan, she embarks on a journey save the Culdcept (the book which the goddess Culdra had kept all the cards in until the War of the Gods) from the Dark Cepters.

The Culdcept manga provides examples of: