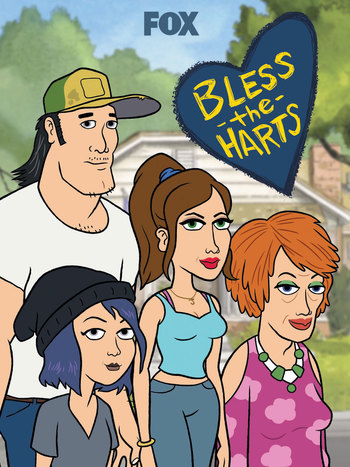 Bless the Harts is an Animated Sitcom on FOX, premiering on September 29, 2019. The show centers on the titular Hart family and their daily lives in North Carolina. Jenny Hart is a single mom trying to make ends meet; Betty Hart is her rebellious mother; Violet Hart is her gloomy, artistic daughter, and Wayne Edwards is Jenny's laid-back live-in boyfriend.

, the show was announced to end after 2 seasons due to declining ratings.

The intro to Bless the Harts.

The intro to Bless the Harts.