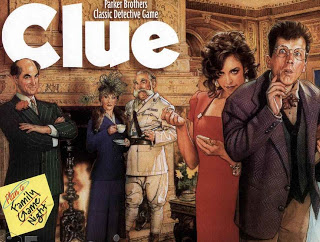 Five of the six suspects on the 1997 release of the American game. note From left to right: Rev. Green, Mrs. Peacock, Colonel Mustard, Miss Scarlet, and Professor Plum. Not shown: Mrs. White.
Advertisement:

I think Professor Plum Described Clue Here, in the office, with the laptop!

Created in 1949 in Britain, Cluedo (Clue in North America) is the iconic mystery board game. Dr. Black (Mr. Boddy in North America) has been murdered in his own mansion and the six people that were present are now considered suspects. Players take the role of any of the six suspects and receive cards containing illustrations of the suspects, the rooms or the weapons. One card of each category is placed in an envelope. To play, the suspects must enter a room in the mansion and make a suggestion such as, "It was Mrs. Peacock in the kitchen with the candlestick!" A different player can reveal a card that matches the suggestion to disprove it. To win the game, a player must make an accusation that matches all three cards contained in the envelope. If the accusation is wrong, the player must sit out for the rest of the game. Note that a player can accuse their own character if they believe themselves to be the murderer. It doesn't make much sense if you think about it, though they could have had amnesia. Another way to look at it is they actually get away with the murder and escape.

The popularity of the game has caused it to be remade into a plethora of different locations and decades over the years. See Themed Stock Board Game. It was popular enough to have its own film, book series (each chapter therein involves Mr. Reginald Boddy and his color-coded guests participating in some activity or another, which would form the basis of a puzzle for the reader to solve, and the final story always involves Mr. Boddy's murder), video game adaptations, a VHS game, a game show, and a Teen Drama miniseries on The Hub. The film itself (starring Tim Curry) is considered a cult classic. There is even an unofficial inversion of the game, Kill Doctor Lucky. Most recently, a comic book adaptation was announced for June 2017

from Hasbro partner IDW Publishing (though like fellow game-based comic Dungeons & Dragons, it's not part of the Hasbro Comic Universe).

Compare Ten Little Murder Victims, And Then There Were None.

"Colonel Mustard, in the forums, with the trope":