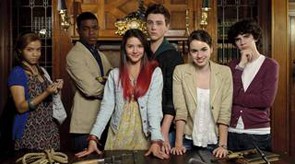 Clue is a 5-episode Mini Series based on the board game that debuted on The Hub on November 14, 2011. At a charity event, six teenagers witness what they believe to be a murder, but when they tell the authorities they're surprised that no one believes them. So, the teens decide to solve the mystery themselves.