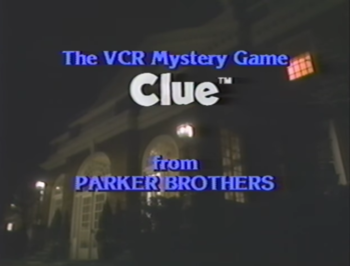 First published in 1985, Parker Brothers designed a new medium of gaming; combining videos played on the VCR with board games. A sequel game, Clue II: Murder in Disguise was published in 1987, with all-new mysteries.

In the first installment, your host is the butler, Didit, and each player takes on the role of one of the suspects. Unlike the original board game, players must solve at least two murders, possibly as many as five to win the game. Players are each given a collection of cards to help them keep track of clues and suspects, as well as investigate to gain more clues, but investigating actions are limited by a separate action deck.

The second installment, Clue II: Murder in Disguise, goes international, with the suspects now pursued by the game's new host - Inspector Pry, of Interpol - through Paris, Tangiers, and Rangoon. The gameplay is improved with the removal of the action deck for a standard menu of actions that can be used on any turn, and the clues are sorted and indicated so that a player can ask specifically for a hint about a Murderer, Victim, Weapon, or Room.

The footage from the first game can be found here

and the second one here.