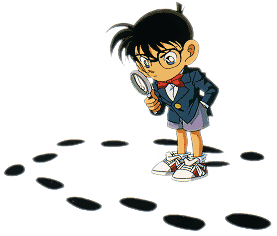 Hey, wait... Those are my footprints.
Advertisement:

The Kid Detective is part Snooping Little Kid, part Amateur Sleuth. This kid lives to snoop, but also sometimes to ask questions of the suspicious adults or those who may have seen or heard something important, and try to piece together what happened.

There are some notable differences between the Kid Detective and adult detectives, however, that make the Kid Detective a unique character. For example, while an adult can go straight to the authorities with evidence, a kid often has difficulty convincing adults of what s/he experienced. Hence, the kid often has to let the adults know what's going on in a roundabout way, or expose it somehow. Sometimes the kid is in fact trusted by detectives, and can go to them directly.

Oftentimes the kid snoops and investigates without adults knowing. This presents many obstacles, such as finding out how to investigate not only without getting caught by the criminal, but also without getting in trouble with parents or authority figures. If the kid does get in trouble, additional restrictions are placed, meaning the kid now has to sneak outside to do any more investigating.

The Kid Detective tends to be more adventure-oriented than the adult detective, meaning that there's often more emphasis on snooping and less emphasis on, say, interrogating or asking questions. Heck, kids can't interrogate suspects anyway, so asking questions to trick the suspect into revealing something is more likely. Also, due to the greater emphasis on snooping and sneaking, getting captured is a bigger threat, resulting in the kid getting Bound and Gagged and having to either break free, attract help, or be freed by a fellow Kid Detective. However, the kid detective is more often pitted against a Harmless Villain, thus avoiding the violence and genuine life or death situations that would surely be part of the adult detective's life.

This trope was a mainstay in the heyday of the Saturday Morning Cartoon like Scooby-Doo and its various imitations; it allowed for dramatic conflict, but focused on characters using their intelligence rather than force to solve problems.

If the Kid Detective comes from a detecting family, odds are they are a Born Detective. One who regularly wears a fedora and trenchcoat is probably trying to be a Hardboiled Detective. Subtrope of Artistic License – Law Enforcement.