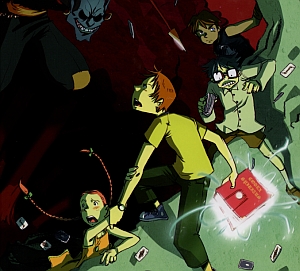 This is the cover used in Spain for the first book. Why can't America get such a cool cover for its own series?
Advertisement:

Children's Urban Fantasy book series about a group of friends who end up going on a series of adventures involving monsters, creatures and magic. Set in the modern world and mixing in some contemporary issues with the fantasy elements.

The four friends are essentially huge nerds, with an interest in comic books and playing card games, and indeed, this is how they met. Early in the first book, they accidentally release creatures from a book called the Codex, and they have to deal with the strange events that soon occur. Eventually, they learn there is a massive plot going on involving a centuries-long war between the Knights Templar (no, not those Knights Templar!) and the forces of Morgan LeFay, an immortal witch. Fortunately, Max, the lead hero and a billionaire, is the descendant of many heroes of the Templar, and many of his servants are also secretly part of this fight.

Although they're the heroes, the kids do not actively fight for the most part, other than occasionally carrying things they need to protect themselves which they need to use. Otherwise, they snoop around, explore, and use their wits to solve problems. Most of the actual fighting is done by adults, and the kids are frequently saved by them when things go wrong. Naturally, as an attempt to get the kids to play the main role in the story, they either end up going on many adventures by themselves or the adults are conveniently separated from them.

Has a lot of potential for fun, but sometimes that potential is ruined by the sheer randomness of the plot (which is part of what makes it fun), Ass Pulls galore (and you gotta love the "at the last moment" rescues), and speech giving.

Starting from the fourth book on, the series becomes The Clockwork Chronicles, as the kids move to a school of magic. This series is in contention, due to the change in dialog and characterization, as well as the new setting.

Not to be confused with Grey Griffin (a.k.a. Grey DeLisle).