Literature / Emil and the Detectives 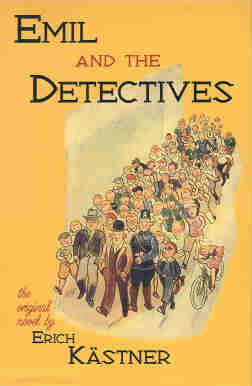 Emil und die Detektive is a German children's book by Erich Kästner, who also wrote Lottie and Lisa, the book that inspired The Parent Trap.

Twelve-year-old Emil, son of a poor single mother, is sent to Berlin for the first time in his life, to bring 140 marks (about a month's income of his mother; it's seven pounds in some versions) to his grandma, for financial support. But when he falls asleep on the train, a man who calls himself Grundeis steals the money from him. Fortunately he meets Gustav with the signal horn, who's the leader of a children's gang and willing to help him catch the guy.

The novel received a sequel, Emil and the Three Twins. It's been adapted for film, television and the stage, and some well-known creators have worked on the various movie versions; Billy Wilder wrote the screenplay for the 1931 film, while Disney produced an adaptation in 1964.