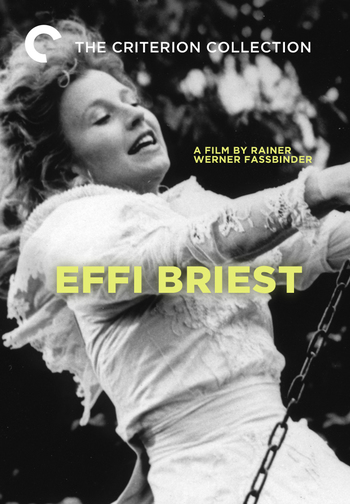 Prussia, the 1890s. Effi Briest is a light-hearted seventeen-year-old; one day her parents introduce her to the 40-year-old Baron von Innstetten, a rising politician, and half an hour later she's engaged to marry him. The couple move to Kessin, a town on the Baltic Sea, where Innstetten is governor. It's a pretty gloomy setting for Effi, with few amusements in town, and a husband who's constantly busy; there's no one to socialize with except the local gentry, who are largely bigoted and dull, and who immediately start passing around disapproving gossip about her. Her only friend is the charming, but ugly, apothecary Gieshübler. Worse, the house Effi and her husband inhabit is rather creepy, and the servants assure her that it's haunted by the ghost of a Chinese man; Innstetten hints that the Chinese man's death was caused by some scandal with a young woman who previously lived there. (Perhaps Innstetten's giving Effi a subtle warning.) The birth of a daughter does nothing to improve Effi's spirits.

Therefore, when a womanizing officer, Major Crampas, comes to town and sets his sights on Effi, it's easy for her to slip into a brief affair with him. It's no great passion, and she greatly dislikes the deceptions and lies she's forced into, so she's very relieved when her husband is transferred to Berlin, giving her a chance to break off the affair. Effi and Innstetten are much happier in Berlin, and finally start to become really fond of each other. Effi is not haunted by guilt, but only by fear of her old transgression being found out. Inevitably, this happens, but not until six years later. When Innstetten learns the truth, he realizes that after all this time, he's neither jealous nor angry, and still loves his wife. Nonetheless, he's a firm believer in the codes of his society, and his actions are decided for him. To uphold "the right thing to do", he will divorce Effi, whom he loves; bar her, a good mother, from seeing her daughter; and fight a duel with Major Crampas, whom he doesn't hate. This is the end of all happiness for both Innstetten and Effi.

Effi Briest is a subtly-written examination of the rigidity and hypocrisy of the value system among the Prussian nobility. It was written by Theodor Fontane, published in 1896. It's one of the great classic novels of German literature, and standard reading in schools. It has been filmed at least six times, most famously by Rainer Werner Fassbinder in 1974, starring Hanna Schygulla as Effi.