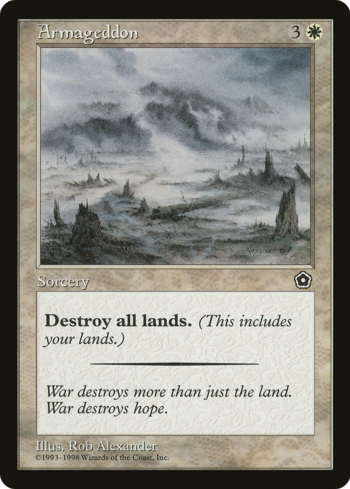 War destroys the land, hope, and your friendships.
Advertisement:

An effect that impacts every player in the same way. It can be mutually beneficial, mutually damaging, or some combination of the two. This may sound underwhelming, and poor use of them can indeed leave you no better off or even screw you over, but many symmetric effects are surprisingly powerful if you find a good use for them. They can even be Game-Breakers if they're strong or disruptive enough.

Conditional symmetric effects are the most straight-forward to take advantage of. "All Wind Spells do double damage" is great if you packed a ton of them while most players have few or none, while "All Water Spells do half damage" won't hinder you if you don't have any. Other symmetric effects can be exploited in subtler ways, but the basic logic is the same: play it when it helps you more than your opponent, or hurts your opponent more than you. For instance, giving all players extra resources helps you if you have better ways to spend them, limiting each player's number of actions benefits you if you only need a few actions anyway, and raining lots of fire upon everyone is nice when you're immune to it.

For many symmetric effects, you have to not only find a set-up that lets you take advantage of them, but also time their use correctly — or even choose not to use them if they would just leave you worse off. For instance, a curse that drains both players' health will be more threatening to whoever has the least health left. Effects that slow down all players' development are good when you're already ahead and want to lock in the game, but if played when you're behind, they'll ruin any hope of you catching up. On the other hand, mass destruction effects can equalize the position when you're behind.

In some cases, the game itself imposes a symmetric condition on the players. Of course, these aren't as exploitable as those under your control, but most of the time you can at least do enough to gain an upper hand over those who didn't bother to prepare for it.

Compare Mutual Disadvantage, where two people are fighting and neither can get an upper hand because they're both disadvantaged in some way. Also compare Power Copying. See also Exploited Immunity, which goes hand-in-hand with exploiting a Symmetric Effect. Alternatively, if you're desperate to take down someone and don't have an exploitable immunity, you can use a Symmetric Effect for Taking You with Me purposes. We Have Reserves is a dark side of using mass destruction effects, when the user doesn't care about the consequences because they're just minions.