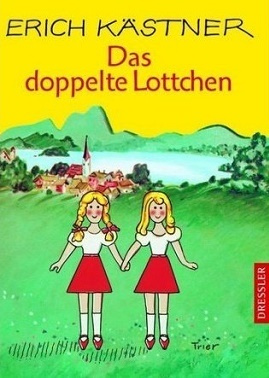 Loud, sassy Luise Palfy from Vienna and shy, responsible Lotte Körner from Munich meet in a summer camp for little girls in the Alps. They are shocked to realize that they look completely alike, except for the fact that Luise's hair is curly while Lotte's is braided. Luise doesn't take it well that someone else is walking around 'with her face' and they get off to a rather bad start. However, over time they become friends and learn a lot about each other: They are both being raised by a single parent (Luise by her father and Lotte by her mother), they were both born in the same city, and they will both turn ten on October 14th of this year... They soon figure out that they are actually twins and their parents separated years ago, splitting them up, and agreed to never tell the girls that they had a sister.

Luise and Lotte want to get to know their mother and father respectively, so they hatch a daring plan: Luise goes to Munich in Lotte's place, and Lotte goes to Vienna in Luise's. Things don't run smoothly, though. "Lotte" has apparently forgotten how to cook during the holidays, is suddenly slapping one of her classmates, and is generally much less of a wallflower than she used to be. At the same time, "Luise" doesn't like her favourite food any more, has started to look after her father's household, and is much better at maths. Things take a turn for the dramatic when the girls' father decides to remarry and Lotte suddenly stops writing to Luise, who starts to worry about her sister.

If this all sounds kind of familiar, both films titled The Parent Trap were based on it. It has also been adapted as a film under its original title (a Truer to the Text version that retains author Erich Kästner as narrator and uses actual twins), as Twice Upon a Time and as Hibari's Lullaby (a Japanese telling). There's also an anime version by TMS Entertainment, made in 1991.

Lottie and Lisa contains examples of: