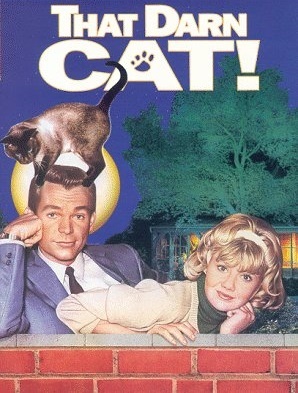 That Darn Cat! is a 1965 Walt Disney Productions film starring Hayley Mills and Dean Jones in a story about bank robbers, kidnapping, and a mischievous cat. It was based on the 1963 book Undercover Cat by Gordon and Mildred Gordon and was directed by Robert Stevenson. The title song was written by the Sherman Brothers and sung by Bobby Darin. That Darn Cat! was the last of six films Hayley Mills made for the Disney Studios. The 1997 remake featured Christina Ricci and Doug E. Doug with a cameo appearance by Jones.

While out one night, "DC" ("Darn Cat"), a mischievous Siamese cat, follows a bank robber to an apartment where he and his partner are holding a bank employee hostage. The desperate hostage starts to write "HELP" on her gold watch, but is forced to place it on DC and smuggle him out before she can finish. The next day, Patti, DC's owner, finds the watch on him and putting two and two together, calls the FBI. Hilarity Ensues.

Not to be confused with That Poor Cat.

Cats meow in tune to the second half of the music, and a dog is heard barking angrily at them at the end.

Cats meow in tune to the second half of the music, and a dog is heard barking angrily at them at the end.