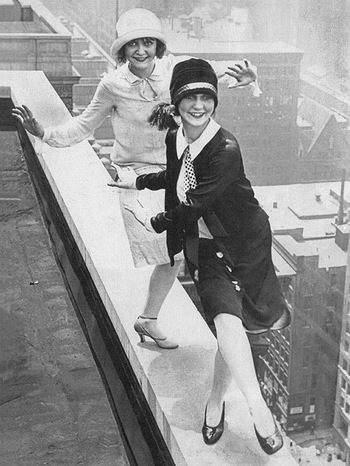 Yes, we're dancing on the ledge of a roof, in heels.
Ain't we got fun?
Advertisement:

The quintessential modern, emancipated Western woman of The Roaring '20s. A young lady even more spirited than the Spirited Young Lady, coming of age in an era when Victorian morals were loosened at the same time that restrictive corsets were, thanks to newfound liberty, rising feminist movements, and (in the U.S.) the 19th Amendment.note Which forbids states from forbidding women from voting. Yes, that's confusing, but that's American Federalism for you. She listened to jazz, danced the Foxtrot, the Tango, the Shimmy, the Peabody, the Black Bottom, the Baltimore Buzz, and the Charleston, wore make-up for the first time since the 18th century, drank with the boys (in America, she was as much an opponent of the 18th Amendmentnote Which prohibited alcohol as she was a fan of the 19th), peppered her speech with slang and cusses, and enjoyed the various other delights that the '20s had to offer. Aesthetically, short hair, short skirts, short, loose & low-waisted evening gowns, turned-up silk stockings, boyish figures, and swanky cloche hats were a must.

The flapper's social and sexual liberty was a result of such feminist developments as women entering the workforce and gaining the right to vote, and of women's growing hatred of the classic notion that promiscuous men were "studs," while promiscuous women were "whores". In the flappers' eyes, "sheiks" and "shebas" were equal, so they could be just as sexually free. Needless to say, this stance contrasted rather starkly with the more conventional view of women as housewives and mothers who should be subordinate to their men and preferably not leave the house.

The popular image of the flapper we know of actually dates back to at least the 1910s. While the word flapper appeared in dictionaries as early as The Gay '90s, the flapper girl started to evolve during World War I and the Prohibition era. Contrary to popular contemporary imagery

, flappers did not always wear sleek bobs, fringed dresses, feathered headbands, and open-toed stiletto heels. These were an invention of filmmakers in The '50s, who tried to evoke the era fit for Technicolor cameras. Actual flappers saw fringe as expensive and very impractical for dancing, hemlines at the time were knee length at its peak before dropping in the very later decade, headbands were Edwardian carryovers that persisted through the early 1920s when some women were reluctant to bob their hair before it went out of fashion by the middle of the decade when bobs became commonplace, and shoes were close-toed and the heels were thick Cuban or Louis. As the decade progressed, and with the help of prominent women like Coco Chanel, hats became tighter and narrower, skirts became shorter, and the silhouette more streamlined, like the image you see above.

The concept also spread east to Japan and China, where it spawned the "modern girl" (モダンガール modan gaaru, or モガ moga for short) and "modern Miss" (摩登小姐 modeng xiaojie) cultures respectively. The modeng xiaojie would likely wear high heels and high-slit, figure-hugging dresses called "cheongsams" in reaction to the painful foot binding and the antiquated loose robes of the Qing dynasty.

The look, high-spirited attitude, and hedonism of the flapper became less acceptable after the Wall Street Crash of 1929 and disappeared following the economic hardships of The Great Depression.

Compare and contrast The Suffragette, her predecessor, and The Lad-ette, her direct descendant and Spiritual Successor.