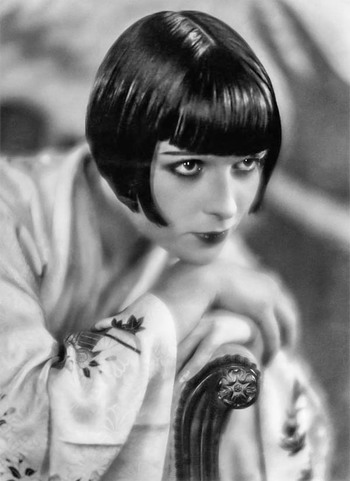 "The great art of films does not consist in descriptive movement of face and body, but in the movements of thought and soul transmitted in a kind of intense isolation."
Advertisement:

Louise Brooks (born Mary Louise Brooks; November 14, 1906 – August 8, 1985) was one of the notable stars of the Silent Film era, whose smoldering eyes and dark bobbed hair helped to codify the screen image of The Flapper.

Born in Kansas, she was known in her youth for her dancing ability prior to landing several roles in Follies and other theater acts under Florenz Ziegfeld. She signed a contract with Paramount in 1925 (against the wishes of her friend and studio producer Walter Wanger, who feared that the perception would be he curried favor with her signing). By 1928, she was disenchanted with Paramount and quit when the studio wouldn't give her a raise.

She subsequently moved to Germany, joined up with director GW Pabst, and starrred in her career making role as Lulu in Pandora's Box. She'd follow it up with Diary of a Lost Girl the next year but both films would be flops at the box office thanks to the transition and immediate rise of the talkies in theaters. Brooks made some poor career decisions around this time, such as refusing to dub lines when Paramount flick The Canary Murder Case (1929) was converted into a talkie, and, worse, turning down the female lead in The Public Enemy (1931). That proved the death knell to her movie career, although she struggled on in a few cheap B Movies. Her last film, the Poverty Row western Overland Stage Raiders, had her looking unrecognizeable

Brooks spent the rest of her life mostly reading, painting, and authoring several autobiographies including Lulu In Hollywood, still considered one of the best movie memoirs ever written.

The biography Brooks by Barry Paris is a must-read for anybody wanting to learn more about her.