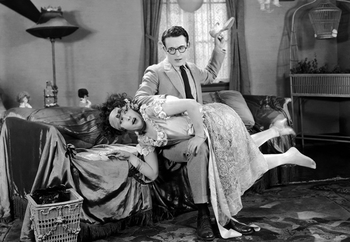 Girl Shy is a 1924 film directed by Fred Taylor and Sam Newmeyer and starring Harold Lloyd.

Here Lloyd plays Harold Meadows, a meek tailor's apprentice in the tiny California town of Little Bend. Harold is terrified to death by girls, reduced to a stammering wreck whenever they talk to him—which of course means that in his spare time he has written a how-to book on the art of romancing women. While on the train to deliver his manuscript to a publisher in Los Angeles, he meets pretty Mary Buckingham (Jobyna Ralston, in the second of her six films with Lloyd), a rich socialite who is headed back home from a country outing. Mary has an unpleasant but persistent (and also rich) suitor named Ronald DeVore, but she takes a shine to Harold.

Unfortunately, Harold is laughed out of the publisher's office. Brokenhearted, and as a result still a poor apprentice, he breaks things off with Mary, who in turn gives in to Ronald's latest marriage proposal. However, the publishers change their mind and decide to publish Harold's little romance guide as a comedy book. At the same time Harold gets that good news he finds out that Mary and Ronald are getting married that very day. He then goes on an epic race to stop the wedding.