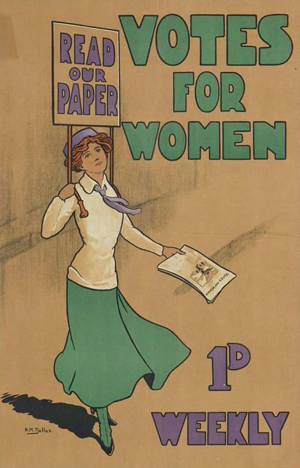 "We're clearly soldiers in petticoats
And dauntless crusaders for woman's votes
Though we adore men individually
We agree that as a group they're rather stupid
Cast off the shackles of yesterday
Shoulder to shoulder into the fray
Our daughters' daughters will adore us
And they'll sing in grateful chorus:
'Well done, Sister Suffragette!'"
— "Sister Suffragette", Mary Poppins
Advertisement:

The Suffragette is a woman who fights for women's right to vote in public political elections.

She's usually an educated, spirited, independent woman with progressive opinions. She's aware that men don't perceive women as their intellectual equals. The Suffragette knows women are diminished, oppressed and patronised. She's willing to fight not only for herself, but especially for her sisters. She wants, above all, equality.

At first, the Suffragette's fight is peaceful. She enjoys discussing her ideas, she gladly crosses swords with people who are opposed and she loves when she convinces someone to join her cause. She's likely to join a group of women of the same persuasion. They write and handout pamphlets or carry placards and banners. However, their peaceful political activism leads nowhere. Now Suffragettes fight with civil disobedience. Women start organizing noisy rallies, they chain themselves to iron railings and acts of vandalism like breaking windows are fair game. A particularly daredevil or desperate Suffragette might endanger her life and die a martyr. At this point, Suffragettes are considered militant and violent. They often get arrested and put in prison. Many of them go on hunger strike and are force-fed. It ain't pretty. Suffragettes often sacrifice their personal happiness, love or family life for the cause. But they persist — because they fight for their daughters and the next generations of women.

Suffragettes often wear white delicate dresses adorned with purple and green sashes. It's important to be feminine in their appearance, as the opposition likes to render them as mannish. However, some Suffragettes couldn't care less what men think, especially about their appearance.

Suffragettes in fiction set in the Victorian period are those who argue their case and fight in the intellectual way. The militant variant comes in full force in The Edwardian Era. It is a fairly popular idea how to portray women in works set in the past as the audience usually find their cause worthy, just and interesting. Some older works however might sneer on their fight as unnecessary, unnatural and affected, and it might be implied that women should care about more important things in life and leave politicking to men.

There are a lot of misconceptions about the suffragettes, mostly caused by bias towards them. A good example is people saying something like "They were political prisoners, yet despite this, they were unfairly treated like common criminals by the big bad authorities". In reality, whilst the suffragettes viewed themselves as political prisoners, they were literally in prison for common crimes (such as vandalism and arson). In other words, they literally were common criminals, albeit ones with political motivation for committing crimes.

Emmeline Pankhurst was the British leader of the campaign and she usually gets at least a shout-out, or she appears as a Historical Domain Character. See also our useful notes on Feminism. For the general trope about suffrage, see Suffrage and Political Liberation.