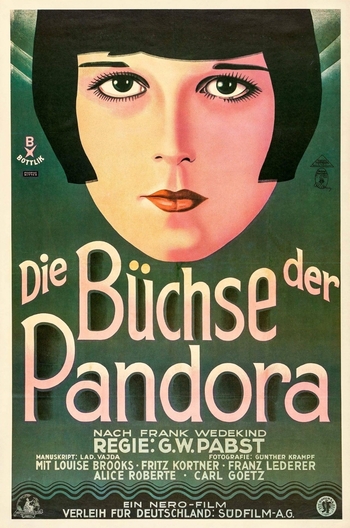 Pandora's Box (Die Büchse der Pandora) is a 1929 German silent drama film directed by G. W. Pabst and starring Louise Brooks. It is widely regarded as one of the all-time classics of Weimar cinema, as well as the greatest role of Brooks's career.

The film centers around Lulu, a sexually uninhibited young woman who is the mistress of Dr. Ludwig Schön, a Berlin newspaper publisher. Dr. Schön comes to tell her that they must break off their affair because he has gotten engaged to Charlotte von Zarnikow, the Minister of the Interior's daughter. Lulu refuses to accept this, but when Dr. Schön meets Schigolch, an unsavory old man who appears to be her former pimp, he stalks out of her apartment.

Meanwhile Lulu has made friends with Dr. Schön's son Alwa, and Alwa's friend Countess Augusta Geschwitz, both of whom clearly have feelings for her. She's hired as a dancer in the musical revue that Alwa is staging, but refuses to go on when Dr. Schön shows up with his fiancée in tow. Schön tries to force Lulu to perform, they kiss, and Charlotte sees them kissing. Lulu, triumphant, winds up marrying Dr. Schön herself... but things do not turn out well for either of them.

Pabst had tried to borrow Brooks from Paramount, where she was under contract, but the studio had refused. Eventually Brooks broke her contract and went to Europe to make the movie. It briefly made her an international star, and Pabst immediately cast her in another silent melodrama, Diary of a Lost Girl. After she returned to Hollywood, however, Brooks's "difficult" reputation led to her becoming effectively blackballed and her career tanked in the '30s. Pandora's Box is remembered today as one of the last great silent movies, with an attitude towards sexuality that was decades ahead of its time. It's one of the oldest movies listed in Danny Peary's book Cult Movies.