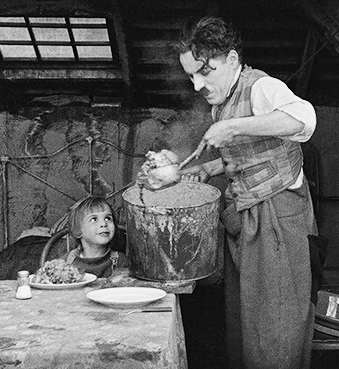 Bon appétit?
"Grease, fried dough, pig fat and sorghum. And you better get to like it ... because you're going to get the same thing every morning, every year."
— Fellow inmate, I Am a Fugitive from a Chain Gang
Advertisement:

When food is being used to transport a message about the low social status or dire life situation of a character.

On one end of the Sliding Scale of Shiny Versus Gritty we have Snooty Haute Cuisine to indicate an upper class environment. On the other end of the spectrum we have Poverty Food for lowlifes, neglected orphans, prison inmates, starving artists, broke college students, and anyone else stuck in a Crapsack World.

Poverty Food is usually portrayed as an unappetizing, bleak and gloppy substance. Truth in Television in the sense that mush-like meals are cheap and easy to make while still being sufficiently nutritious. If it's not gruel, expect poor people to chew on (dried) bread or eat instant ramen.

In Real Life the types of food eaten during hard times often become stigmatized in the times of plenty, turning into a kind of a Stock "Yuck!" in that particular culture. This happens not only because people often resort to eating something they hardly consider palatable, but also because of psychological association of eating certain types of food with poverty.

Supertrope to a number of scenarios wherein characters struggle with the quality of their diet. In ascending order of grossness: