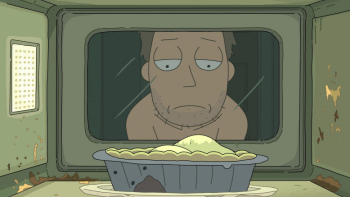 John Henry Giles: No woman waiting at home after work with the drink and the kiss. That ain't gonna happen for us.
Dr. Gregory House: That's why God made microwaves.
— House
Frozen dinners, despite their absurd sodium content, are actually decent meals. Quick, efficient, and for some people, quite tasty. However, if a character in fiction eats one alone, then it's a sign that they're utterly alone. For one thing, it shows that there's no one in their life to cook for them (or for them to cook for). It's also a quintessential sign of a bachelor. See also Empty Fridge, Empty Life.
Advertisement: