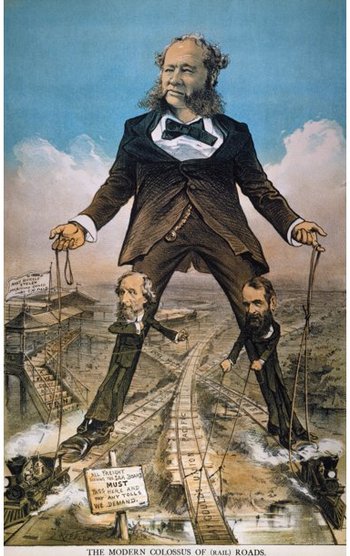 "Every age has its temptations, its weaknesses, its dangers. Ours is in the line of the snobbish and the sordid."
— Rutherford B. Hayes
Advertisement:

The Gilded Age is one of the most common terms for the period in American history between the end of the Civil War until the presidency of Theodore Roosevelt at the turn of the 20th century. During this period, the expansion of industrialization in the United States initiated a period of rapid economic growth. Due to American wage levels increasing at a much higher level compared to that of Europe, extensive European immigration (primarily from Germany, Italy and Eastern Europe) caused significant changes to the demographics of the United States.

The "native" WASPs welcomed the 'pure' Nordic and Germanic immigrants but lamented the racial watering-down that came with the influx of Irish, Italians, and various groups from Southern and Eastern Europe. Particularly alarming to WASP America was the large influx of Ashkenazi Jews (many of whom were trying to escape a series of especially violent pogroms in Tsarist Russia after Tsar Alexander II was assassinated) and Chinese (may of whom were fleeing from extreme poverty and instability caused by the deterioration of the dying Qing dynasty). While anti-miscegenation laws making Chinese-White and Black-White marriages illegal were successfully enacted in a number of states, there was no success with preventing intermixing between European emigrant ethnicities - though immigration quotas restricting their numbers were soon implemented. All these immigrants came chasing The American Dream; the vast majority were treated to slums and sweatshops in America's rapidly-growing cities. It should come as no surprise, then, that the name "Gilded Age" comes from a story co-written by Mark Twain and Charles Dudley Warner in 1873, and refers to the extreme opulence of the era contrasted with widespread poverty on the ground, compared to a "gilded" item: one covered in gold, but actually made of something less valuable.

As you might imagine, this era is particularly rich in tropes. J. P. Morgan, Jay Gould, the Vanderbilts, and other Robber Barons populate the posh districts of New York, Boston, and Philadelphia, while the poor new immigrants find life hard in the vast slums. The Republican Party runs everything in Washington as a political machine despite the protests of the reforming "Mugwumps" within the GOP. The only Democrat to win the White House during these 35 years was Grover Cleveland, a reformer who only won because he had support from the Mugwumps—indeed the term "Mugwump" arose as a term of abuse for Republicans who supported Cleveland (it's a long story, but in essence people who used the term "mugwump" accused them of being Holier Than Thou).

In the South, there is Reconstruction and then its end: the aftermath of the abolition of slavery, with Carpetbaggers coming from the North to take advantage of business opportunities and African-Americans getting their rights only to see them stripped away in the wake of the deal to put Rutherford B. Hayes in the White House in the election of 1876. Expect to see the former Southern Belle as a Princess in Rags and the Southern Gentleman as a member of The Klan.

As for the economy, deflation and banking panics were huge problems, big monopolies crushed local competition, and unions and farmers struggled to find their voice. Eventually, people got so fed up with everything going on that a widespread reform movement began in the country around the 1890s. This is known as the Progressive Era, and it brought us Theodore Roosevelt and Woodrow Wilson.

Out West is The Wild West, which is of course a trope of its own. The Steampunk and its offshoot, Gaslamp Fantasy, can take place in this period.

Not be confused the HBO series of the same name, though it does takes place during that period. No relations to the Gilded Cage trope either.

See also: Victorian Britain/Victorian London and The Edwardian Era (which covers this time period across The Pond). For Japan see Meiji Restoration.

NOTE: Wild West examples should go in that page.

Tropes associated with that period in fiction include:

Works set in this time period