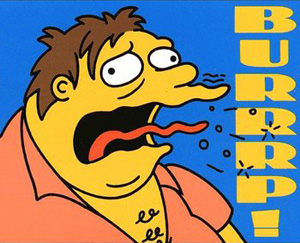 Better bring some noseplugs.
"If I wanna put a trumpet in my ass and run around this restaurant and blow "Hallelujah, Yankee Doodle," that's my business!"
— Cletus Klump, Nutty Professor II: The Klumps

A Gasshole is a character in a series who is known for being, well, gassy. The humor may focus on the frequency with which this person farts or belches, the magnitude of their emissions, or their shamelessness about it. If they use their, ahem, talent as a form of attack, the trope is Fartillery, and if they meet their match it's Farts on Fire. If this character is fat, they may be a Fat Comic Relief.

A blatant example of Toilet Humour. This can be often a way to show how unrefined a Fat Slob can be (though there's little correlation between weight and gassiness in real life), and an audible sign of Jabba Table Manners.

Although female examples have become common enough that this is no longer an Always Male trope, most examples will be men (see Beauty Is Never Tarnished). Women who are depicted as Gassholes will usually be The Lad-ette, or at least a tomboy; the occasional classy lady (especially the Grande Dame) or girly-girl type who lets out a very unlady-like belch or fart as a comedic gag is an exception.

open/close all folders
Anime & Manga
He also jokes around with Manebu's father. One of their favorites is pronouncing Manebu's name "Mane-" and using a fart to say the rest, as "buu" is a Japanese onomatopoeia for fart.
Comic Books
Comic Strips

Bessie farts during a Honeybee meeting, causing her to be banished from the troop.

Bessie farts during a Honeybee meeting, causing her to be banished from the troop.