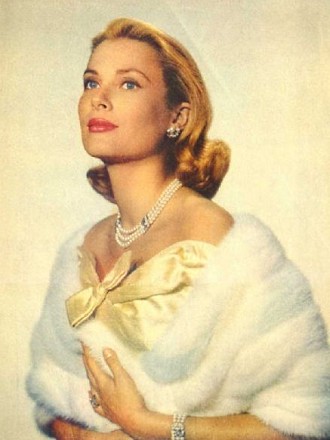 "Hollywood Royalty" in the most literal sense.
Advertisement:

You know that fantasy young girls have about becoming princesses? She actually went out and did it.

Grace Patricia Kelly (November 12, 1929 – September 14, 1982) was an American actress and later, the Princess of Monaco. Born into a prominent family in Philadelphia's tight-knit Catholic community, Kelly decided to pursue an acting career in New York after getting rejected from exclusive Bennington College. After quickly working her way up through Broadway and early live television, she made her film debut in a small role in the 1951 Film Noir Fourteen Hours.

Kelly's on-screen acting career lasted only six years, but in that time she established herself as one of the legendary actresses of Hollywood. Her first important role was in the classic Western High Noon in 1952. In 1953, she appeared in Mogambo with Clark Gable. Her next film was Dial M for Murder (1954), a thriller directed by Alfred Hitchcock; she became one of his favorite actors. After that, she worked with Hitchcock again in Rear Window, where she played Jimmy Stewart's fashion model girlfriend - probably her most famous role. Then she went against her type of glamorous, high-class women, and played the long-suffering wife of an alcoholic actor (Bing Crosby) in The Country Girl. She won the Oscar for that role. She also had a minor part in the war film The Bridges at Toko-Ri. In 1955, she appeared again in a Hitchcock movie, To Catch a Thief with Cary Grant. Her next movie was The Swan in 1956, where she coincidentally portrayed a princess. In the same year, she played her last role in High Society, a musical version of The Philadelphia Story with Bing Crosby and Frank Sinatra.

In 1955, while To Catch a Thief was being filmed in and around Monaco, she met Prince Rainier, and she married him in 1956, becoming Her Serene Highness Princess Grace of Monaco. Their wedding was turned into a huge media circus, and the family continues to be a media fixture to this day (only rivaled by the coverage of The British Royal Family). They had three children together (their only son, Albert, is now the prince of Monaco). She died in a car crash in Monaco in 1982.

She was an icon of style and fashion, and her influence extends to this day.

Associated Tropes with her roles: