Film / The Bridges at Toko-Ri 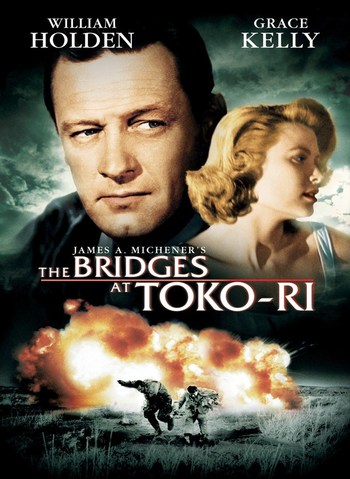 The Bridges at Toko-Ri is a 1954 film adaptation of the 1953 novel by James Michener, directed by Mark Robson and starring William Holden, Grace Kelly, Fredric March, and Mickey Rooney.

It's 1951, and The Korean War is at a bloody stalemate. U.S. Navy Lieutenant Harry Brubaker (Holden) has to ditch his battle-damaged F9F Panther jet fighter-bomber before he can get back to his carrier, USS Savo Island. He is quickly picked up by a rescue helicopter flown by Chief Naval Aviation Pilot Mike Forney (Rooney) and Airman Nestor Gamidge.

Safely back aboard the Savo Island, Brubaker is angry and depressed. He is a reservist who fought in WWII and was recalled to active duty for Korea, considers the conflict pointless, and desperately wishes to go home to his wife and daughters. The Task Force commander, Rear Admiral George Tarrant (March), tries to counsel Brubaker to get his head in the game. Brubaker reminds Tarrant of his sons, both of whom were killed in WWII.

The carrier makes a port call in Yokosuka, Japan, where Brubaker’s wife Nancy (Kelly) flies in from the States with their children to see him. Their reunion is interrupted when Airman Gamidge seeks Brubaker’s help in getting Chief Forney out of some trouble. As he leaves, Admiral Tarrant meets Nancy Brubaker and warns her that her husband will have to fly extremely high-risk missions over North Korea on their next deployment, as the Task Force has been ordered to destroy a strategically-important and heavily defended pair of bridges near the village of Toko-Ri. He advises Nancy to prepare herself for the worst, because his own wife and daughter-in-law were unprepared for the tragedy they suffered in the last war.

Meanwhile, Brubaker finds out that Mike Forney's Japanese girlfriend has left him for a sailor from another aircraft carrier, USS Essex, and Forney started a brawl between nearly the entire crews of both ships in response. Forney and Gamidge are kicked off of the Savo Island and assigned to a mail barge, while Brubaker ships out on the carrier again. Returning to the western Sea of Japan, he barely makes it back from a reconnaissance mission to Toko-Ri. Brubaker knows he will be assigned to the air strike and desperately wants out, but can't bear to abandon the other pilots who will be going with him.