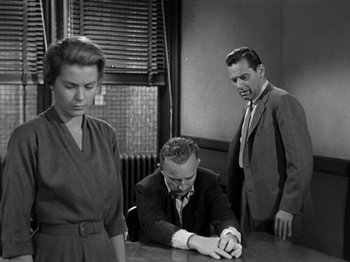 The Country Girl is a 1954 drama film directed by George Seaton, starring Bing Crosby, Grace Kelly, and William Holden. It was adapted from the 1950 play of the same name by Clifford Odets.

Frank Elgin (Crosby) was once a famous singer and entertainer, but has long since fallen on hard times, and is now an alcoholic has-been. Theater director Bernie Dodd (Holden) auditions Frank for a part in his new Broadway musical, The Land Around Us, and decides that this is an appropriate comeback vehicle for Frank. Bernie soon discovers just how far Frank has fallen when he tracks the singer down to the shabby one-room apartment where he lives in melancholy desperation with his wife, Georgie (Kelly).

Georgie and Frank's marriage has suffered greatly since their son was killed in a traffic accident. Georgie is determined to stand by Frank, but she is completely honest about his alcoholism and generally fragile state, and believes that she must stay by him during the production to get him on the straight and narrow. Bernie, for his part, believes that Georgie's hovering is having the opposite effect, undercutting Frank's confidence and making it harder for him to stay on the wagon and focused on his role. The situation is further complicated when Bernie and Georgie start falling in love.

The Country Girl was a case of Playing Against Type for both Crosby, who usually starred in musicals and light comedies, and Kelly, who usually played glamour queens. Kelly won the Academy Award and Golden Globe Award for her performance, while Seaton took home an Oscar for his screenplay adaptation.