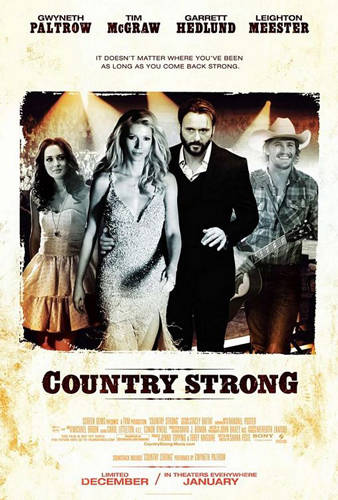 It doesn't matter where you've been as long as you come back strong.
Advertisement:

A 2011 film starring Gwyneth Paltrow, Leighton Meester, Garrett Hedlund and Country Music singer Tim McGraw. Paltrow stars as Kelly Canter, a Country Music singer with a flagging career and personal troubles who is just coming out of rehab. To restart her career, she goes on tour with her husband/manager James (played by McGraw) and two rising young country singers: Beau Hutton (Hedlund) and former beauty queen Chiles Stanton (Meester). Along the way, the four get involved in romantic entanglements.

The album's soundtrack was released in October, featuring songs performed by its stars and various other country singers. Both the title track (sung by Paltrow) and Sara Evans' "A Little Bit Stronger" have become top 40 hits on the country charts.