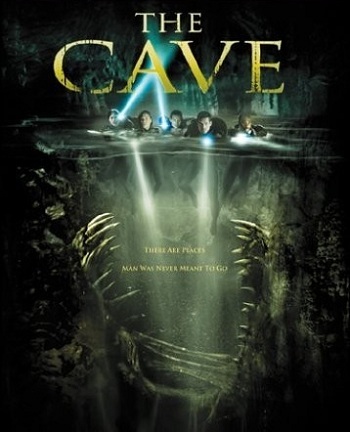 The story starts 30 years ago when an exploration team excavates an entrance under a stone church in the Carpathian Mountains, and as they enter in a rockslide traps the explorers under the church, never to be heard from again. 30 years after that, a team of researchers led by Dr. Nicolai and his assistant, Dr. Kathryn begin to explore the area where the exploration team disappeared. Eventually they find access under the church in an underwater river, and a group of experienced divers join the two doctors in exploring further. As they progress along and begin to go deeper and deeper into the earth, Dr. Nicolai learns of the legend regarding the Church, which was built to seal something evil under it, and that Templar Knights would venture into these caves to fight horrid human-like winged demons.

As they go deeper, they discover more of these atrocious winged monsters, and they begin to attack them and killing them off one by one while the team attempts to defy yawning underground chasms, powerful underwater currents, and each other as they begin to learn more sinister things about each other and question whether or not they can trust each other as something begins to develop in their team mates...

At its base, The Cave was a very good stand alone movie, and while it was released at the same time as a couple other movies with similarities (such as The Descent and The Cavern), the movie was able to develop a cult following.

Tropes that can be found in The Cave: