Film / The Cave of the Yellow Dog 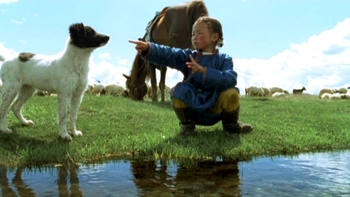 The Cave of the Yellow Dog is a 2006 film from Mongolia, directed by Byambasuren Davaa.

Nansal is a little girl of maybe nine years who comes from a family of nomads living on the steppes of Mongolia. Like all Mongolian nomads, Nansal's family scrapes out a living raising livestock and selling their meats and skins. Nansal's father is worried about wolves, which are a major problem for Mongolian nomads as they will catch and eat a nomad's livestock.

Nansal comes home from the boarding school that nomadic children must attend if they want an education. While gathering up animal dung to be used as fuel, she finds a stray dog in a cave. She christens her dog Zochor ("Spot") and brings him back to the family yurt. Her father tells her that they can't keep the dog as dogs on the Mongolian steppe cohabitate with wolves and will bring the attention of wolves to their herd of animals. Nansal, however, won't take no for an answer.