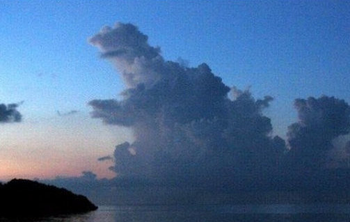 Godzilla. The clouds honor him.
Lucy: If you use your imagination, you can see lots of things in the cloud formation...What do you think you see, Linus?
Linus: Well, those clouds up there look to me like the map of the British Honduras in the Caribbean... That cloud up there looks a little like the profile of Thomas Eakins, the famous painter and sculptor...and that group of clouds over there gives me the impression of the stoning of Stephen...I can see the Apostle Paul standing there to one side....
Lucy: Uh huh...That's very good... What do you see in the clouds, Charlie Brown?
Charlie Brown: Well, I was going to say I saw a ducky and a horsie, but I changed my mind.
— Peanuts, see a video clip from A Boy Named Charlie Brown with this scene here

Basically looking at clouds and what shape they resemble. Often done in Real Life, but fiction will of course play around with it. Sometimes the cloud will literally look like the thing, for one. The official term for this is "pareidolia".

Sometimes, just to be funny, someone will say "It looks like mashed potatoes / a marshmallow / an airborne agglomeration of moisture!" Another common joke is for the character to say it looks like some kind of airborne object (i.e. an airplane, a bird, a Giant Flyer, or a spaceship) only for the audience to then see that it's exactly that.

Compare Does This Remind You of Anything?, Watching the Sunset, Inkblot Test, and Stargazing Scene.

JonTron notices a cloud that resembles a certain cartoon character, and another one resembling a certain legal document.

JonTron notices a cloud that resembles a certain cartoon character, and another one resembling a certain legal document.