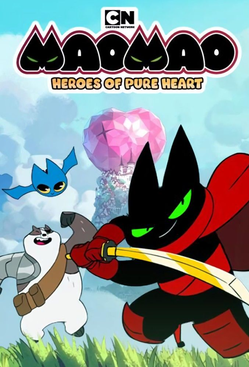 "I’m gonna be a legend." note Clockwise from top: Adorabat, Mao Mao, and Badgerclops.
"I love you
I love you Mao Mao!
Finally, my dreams are coming true
You're showing me how
How to be a hero, like you!"
— Theme song
Advertisement:

Mao Mao: Heroes of Pure Heart is an animated adventure comedy from Cartoon Network and Titmouse, created by Parker Simmons, a former storyboard artist for OK K.O.! Let's Be Heroes. It was announced on May 20, 2019, stealth premiering its first episode the same day on Cartoon Network's website and app. Futher episodes would premiere on the app the following month, with the series receiving its linear network premiere on July 1, 2019. On July 23, 2020 a second season was announced. However, currently there has been no further news on its current status.

Mao Mao and Badgerclops used to travel the world as wandering heroes, until one day they crashed into and broke the Ruby Pure Heart, destroying the barrier protecting Pure Heart Valley. Mao Mao, feeling personally at fault, decide that he and Badgerclops should stay and defend the valley and its residents in the artifact's stead. Joined by the adventure-longing Adorabat, the trio work together and find themselves facing all sorts of monsters and mayhem.

Example of:
Heartbreak and Ice Cream