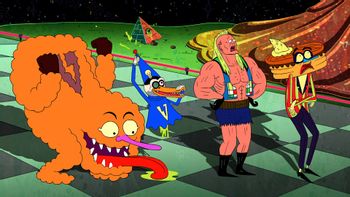 "Twelve trillion years before the alleged Big Bang lived King Star King: the greatest hero who ever was, is, or shall be!"
—Narrator
Advertisement:

King Star King is an short-lived cartoon from Adult Swim, and easily one of their most polarizing shows to date (and that's really saying something). Despite losing a pilot contest to Übermansion (Later renamed SuperMansion), the series was greenlit for 6 additional episodes. The pilot episode aired on Toonami in late 2013 alongside Sword Art Online during an daylight saving time, prompting a very mixed to negative reaction from the Toonami viewers, who went online to either praise the show or hate it. As a result, King Star King has a strong hatedom.

The series revolves around the titular character, King Star King (Tommy Blacha): a perverted demigod who was kicked off the Heavenly Realm and gets served to work in the Wafflezone restaurant. As he must battle his amnesia to defeat the evil Spring Bunny and rescue his love Snow White.

At least, that's how it goes for the pilot and first episode. After King Star King and his new friends hilariously (and violently) fail to save Princess Snow White, they undergo a variety of nightmarish and disjointed adventures.

The show is perhaps best described as Superjail! on bath salts. With its graphic gore, non-stop over-the-top sexism, grotesque drug-fueled surrealism, deviant sexual behavior, and completely random, nonsensical plots, King Star King is - to put it mildly - definitely not for everyone. Like many other Adult Swim shows such as The Eric Andre Show and Tim and Eric Awesome Show, Great Job!, King Star King is about as polarizing as a show can possibly be.

This show provides examples of nothing, considering the amount of commented out examples: