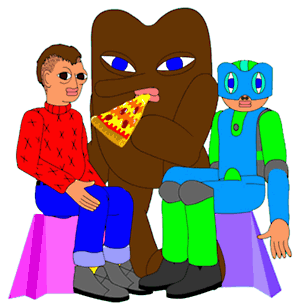 If you got a problem, yo, they'll solve it.
Advertisement:

The Problem Solverz is an Animated Show that aired from April 4, 2011 to March 30, 2013 on Cartoon Network. Created by artist Ben Jones, it was originally pitched to Adult Swim as Neon Knome, but it was rejected and instead refitted for a younger audience.

The series follows the incredibly surreal adventures of three friends whose job it is to solve problems: Horace, an Every Man with a bad buzz cut; Roba, a Nerd who dresses as a robot; and Alfe, an infantile part-dog, part-anteater, part-human who really likes pizza. Along the way, they are aided by Tux Dog, a wealthy canine who advises them on cases.

The show is noted for its incredibly bright, flashy animation style and very crude, poorly drawn character designs, giving it the look of an '80s video game in the vein of Code Monkeys, while also bearing similarities tonally to Adult Swim shows like Aqua Teen Hunger Force.

The show has been the subject of mass criticism... Flame War-level criticism. Its arrival to Cartoon Network unfortunately coincided with the cancellation of Sym-Bionic Titan, and the series was seen as a vastly inferior replacement, turning it into The Scapegoat. It didn't help that many people accused the show of getting Sym-Bionic Titan canceled. However, the show has a collective fanbase despite the rough patches.

The show went on hiatus after its first season, and eventually suffered a quiet cancelation on March 30, 2013. However, though CN has only aired its first season on the network, the second season became exclusive to Netflix in early 2013 (before the whole show was taken off of Netflix in 2015).

Another life ruined by - THE PROBLEM TROPERS!