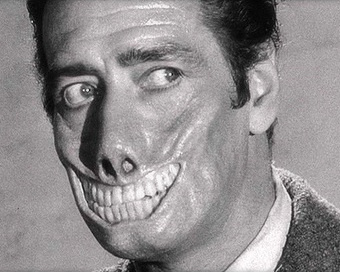 He just can't stop smiling.
He's human. But he might as well be a robot or wearing a mask, for all the emotions that his face shows.
Advertisement:

Nerve damage or scars prevent him from showing any expression. Nothing, from abject terror to astounded delight to overwhelming fury to soul-shaking grief, can change his face. (Tears may be possible.)

May make him appear as The Stoic, the Tin Man, or the Perpetual Frowner, but appearances are deceiving. Invariably deeply traumatized — after all, he got the scars somewhere. Ironically enough, the more visible the scars are, the less likely people are to assume the lack of facial expression means no feelings. (They have other problems, but they do undermine that assumption.)

Sometimes an advantage, even for the same characters, when they do not reveal emotions they do not want to.

It can be the result of cosmetic surgery, in which case the cosmetic surgery backfires big time. Which is Always Female, and she gets no sympathy. Then, given the vanity she is depicted with, she doesn't want any. Can also be portrayed as Surprisingly Realistic Outcome or An Aesop against Magic Plastic Surgery. If True Beauty Is on the Inside this trope is played to symbolise that they lack it.

Compare Feel No Pain, often also nerve damage, and Unable to Cry. Sometimes (but definitely not always) can overlap with Dull Surprise. Contrast Perpetual Expression, when the face just looks like this, but there isn't a reason for it not to move.

Have in mind that this is about physical faces; masks and helmets should be frozen by default. Unless they are not, or show the face anyway, or are not worn to begin with.

Please note, many animated shows will feature characters who appear paralyzed but for their mouth movements. This is caused by reducing frames due to low budgets and is not the same thing.

Has nothing to do with either Frozen (2010) or the Disney Animated Canon franchise Frozen.

In The Revenge of Jimmy his face got stuck in a permanent sneer. At least until the end. Beforehand, his mom keeps telling him not to make faces.

In The Revenge of Jimmy his face got stuck in a permanent sneer. At least until the end. Beforehand, his mom keeps telling him not to make faces.