Literature / The Man Who Laughs 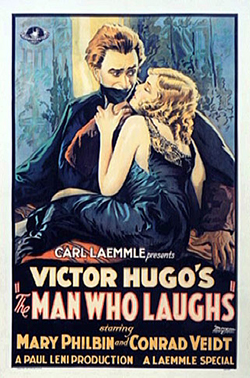 His love is real, but his smile is not.
An 1869 Victor Hugo novel.
Advertisement:

The eponymous protagonist, Gwynplaine, bears a face disfigured by torture into a permanent smile. It was done to him as a child in order to punish him for his nobleman father's offense to the king. One night, after being abandoned in the snow, Gwynplaine wanders aimlessly, seeking shelter. He comes across the corpse of a woman who had frozen to death underneath a dead man hanging from a gibbet

. In her arms, he finds a still living, blind baby girl. Eventually, Gwynplaine comes to the home of the charlatan Ursus and his wolf companion Homo. Ursus has pity upon the two orphan children and takes them in.

Several years later, we see that the group have been making a living traveling from place to place performing plays which all showcase Gwynplaine revealing his disfigured, smiling face to the crowd. The blind child has also survived, growing up to be the virtuous, graceful beauty known as Dea. Dea is in love with Gwynplaine who, though he reciprocates, feels unworthy of her because of his disfigurement.

Upon doing a show at a village fair, Gwynplaine attracts the attention of the bored, sexy duchess Josiana. He soon gains even more attention from the Queen Anne as it is found out that Gwynplaine is the son and heir to Lord Linnaeus Clancharlie's position and estate.

The original novel follows a path similar to many of Hugo's other novels, ending in a depressing Downer Ending. Though not the author's most well-known work, there have been several film versions of the story (only one of which is in sound). The most well-known and best remembered adaptation is the heart-wrenchingly beautiful 1928 movie. It featured Conrad Veidt as the main character, whose freakish grin and clown-like appearance was the primary inspiration for Batman's Arch-Enemy the Joker, which came full circle in the 1989 Short Story, The Man Who Laughs (by Stuart M Kaminsky), first published in The Further Adventures of Batman. Referenced again in 2005 with "Batman: The Man Who Laughs", the sequel to Batman: Year One, and again with Dark Nights: Metal, which introduced The Batman Who Laughs as a villain.

A new, French adaptation of the film was released in 2012, starring Gérard Depardieu and Emmanuelle Seigner.

The Man Who Laughs contains examples of: