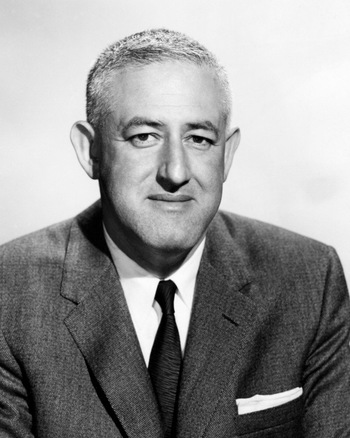 "We all have a common interest: bigger and more horrible monsters... and I'm just the monster to bring them to you."
Advertisement:

Born in New York City and left an orphan by the time he was 11, Castle dropped out of high school at 15 to work in theater. When he was 18, he directed a stage production of Dracula. He began playing uncredited bit parts in movies in 1937, and by the early 1940s had worked his way up to directing B Movies for Columbia Pictures.

Castle co-produced Orson Welles' The Lady from Shanghai in 1947, and produced a few television series in the 1950s, but his big breakthrough as an independent producer-director came in 1958 with Macabre, which he promoted by insuring audience members for $1000 against death from fright. Over the next three years, Castle directed and produced a string of low-budget horror movies, each one baiting audiences with its own lurid, trademark gimmick: "Emergo" (House on Haunted Hill), "Percepto" (The Tingler), "Illusion-O" (13 Ghosts), the "Fright Break" (Homicidal), and the "Punishment Poll" (Mr. Sardonicus).

Castle's films after 1961, not all of which fall under the horror genre, used more subtle gimmicks, when they used gimmicks at all. In some cases, the gimmick was the top billing of fading stars from The Golden Age of Hollywood such as Joan Crawford. The biggest success among Castle's later productions, 1968's Rosemary's Baby, had Castle under contract not to direct (Roman Polański took the helm instead). Castle also chose not to direct his final production, 1975's Bug. That same year he had his final onscreen role, as the director of the doomed film within a film in John Schlesinger's The Day of the Locust.

Films directed by William Castle include: